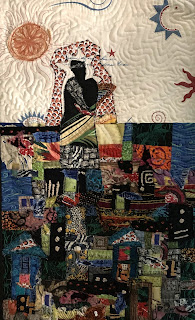 Katrina: I am an American Citizen
This quilt was made in the dreadful aftermath of Hurricane Katrina. I'll never forget the sight of a young woman in that huge stadium crowded with survivors, holding up a bottle of water and telling the camera that it was all she got from the government. "I am an American citizen," she said, unforgettably. Those words are stamped on squares of cloth and incorporated into the quilt.  The central figure is made out of an old bathing suit, purposeful use of blues with wavy prints are employed to suggest water, and the suggestion of a crown around the figure refers to the Statue of Liberty, which after all, was a gift to America at the cessation of slavery.  Sadly, Bush’s insufficient response to Katrina was repeated in the aftermath of Hurricane Maria in Puerto Rico by Trump.
Global Warming
The cool house structure is intact, but for how long with the chaotic, swirling storms and invading tropical plants?