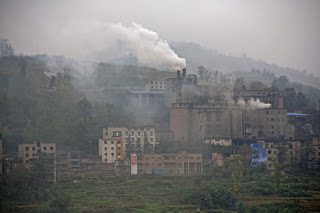 Daylight on the Yangtze River at first appear to be early morning mist…but it never lifts. Like fire-spewing dragons, cement factories spew pollution and cloud the homes and land of people who have lived in harmony with their environment for ages.
Some people wear masks to filter the pollutants that irritate eyes and throat… but in the end masks cannot prevent contamination. China’s water supply, crops and fish have already reached frighteningly high levels of contamination…which should give us all something to cry over and do something about. Pollution contributes to premature deaths and contamination knows no borders and crosses oceans with remarkable potency.
The Forbidden City takes on a new connotation as pollution adds to its forbidden-ness…but pollution is not limited to Beijing.  Pollution knows no boundaries. It is spreading throughout the world, across oceans, even down into the pristine air of Antarctica. Once upon a time Beijing was known as a city of open skies.  Today the air is thick and grey from coal, its most abundant energy source.